Here at Lafayette Music Company, we are all passionate about music!

Raymond Goodrich II serves Lafayette Music Company as President and Chief Operations Officer. He truly enjoys sharing his love for music with clients on a daily basis. Raymond earned his Bachelor of Science Degree in Business Administration & Management with a minor in Music from USL. At that time, he proudly played trumpet for the Pride of Acadiana Marching Band, and other music ensembles at USL including the Jazz Band, Wind Ensemble, and Trumpet Ensemble. He has been in the music industry since 1988 and in management since 1991.

Outside of work, he enjoys and is inspired by live music performances of all types. Raymond is an Eagle Scout and volunteers with the Boy Scouts of America. Being outdoors is another passion of his, and on the weekends you can usually find him on the water or in the woods.

Jack-of-all-trades, Blaine Goodrich officially serves Lafayette Music Company as Chief Information Officer. Blaine has a Bachelor of Science Degree in Accounting and a Masters of Business Administration with a concentration in Finance from LSU. Before joining Lafayette Music in 2010, Blaine worked in real estate development and construction as a lead financial analyst and later as a Chief Financial Officer.

An amateur trumpet player since middle school, he enjoys a wide range of music genres from classical to jazz and rock to country. On the weekends, Blaine can be found in the outdoors, hunting, fishing, camping, canoeing, and biking!

Serving Lafayette Music Company since 1982 as Chief Financial Officer, head of the accounting Department, and wife to owner Raymond Goodrich, Karen Goodrich is a lady behind the scenes.

Karen has worked in the accounting industry since 1965, and earned her CPA certification in 1974. Prior to joining the Lafayette Music Company team, she was a partner in Walton & Goodrich CPAs as well as Broussard, Poche, Lewis, and Breaux LLP. Karen enjoys many genres of music, most notably classical and classic rock.

Our man on the go, Wilfred "Will” Green has been with Lafayette Music Company since 1979. Will graduated from USL in 1976 with a Bachelor of Art Degree in Music Education. Two years later, in 1978, he earned his Master of Music Degree in Instrumental Music.

Will pounds the pavement throughout the year visiting the region’s school band programs. You might also recognize Mr. Green, as he proudly serves as trumpeter for many of the weddings and funerals in Acadian as well as the band First Class.

Mr. Fix-it, Ken Hulse works in Lafayette Music Company’s service and repair department with 14 years of band & string instrument repair experience. A transplant from New York state, Ken boasts a Bachelor of Music Degree in Music Performance on tuba from SUNY Fredonia and a Master of Music Degree in Performance and Conducting from Lafayette’s own USL.

Ken also has the distinction of being a Professional Level member of NAPBIRT (National Association of Band Instrument Repair Technicians) for 9 years. Musically, Ken currently plays the electric bass with Skyliner’s Big Band as well as the bass guitar, tuba, euphonium and trombone as a freelance artist.

Kevin "KT” Tyler has been an employee at Lafayette Music Company for over 20 years now. Starting with the company as a piano delivery driver, he has worn many hats through the years. His other duties have included, refinishing woodwork on pianos, church organ and sound system installations, and most recently warehouse manager in charge of shipping and receiving.

Outside of work, Kevin has lots of experience in the music world. In the 1980’s Kevin spent several years on the road playing with the top 40 variety band Hotline. As a talented musician on the guitar, bass, drums and keys, Kevin still plays with the band Hotline from time to time.

Beth Gonsoulin brings 37 years of bookkeeping experience to the Lafayette Music Company accounting team. Although she loves and appreciates a variety of music, she wishes she could play an instrument other than the radio.

After graduating from South Lafourche High School in Cut Off, Louisiana, Cody Hebert attended The University of Louisiana, Lafayette, as a Bachelors of General Studies Major with a focus in Arts & Humanities.

While working with high school bands, Cody has been involved with Louisiana Stars Drum & Bugle Corps since its inaugural year in the 2014 season. His involvement has led from being on administrative staff to being a technician for the baritone section. The 2017 season will mark Cody’s first year as being the Brass Arranger for the corps.

Cody resides in Lafayette, Louisiana, and serves as a marching band instructor and clinician. Amongst all of what he is involved with, he enjoys writing music, instructing, and continuously motivating students to perform at the highest caliber they can, and most importantly, have fun.

His professional memberships include:

Tuba and bass are Justin’s instruments of choice. Having performed with the Bluecoats Drum and Bugle Corps, Justin received a DCI Bronze medal his age-out year. With over 5 years of retail experience under his belt, Justin loves to talk gear. Anything from vintage guitars to choosing the next pedal for your board, Justin is the man to talk to.

Brenda Montiel offers excellent customer service with over 30 years of retail and retail management experience. She is well educated in the retail industry, having completed multiple training courses in management skills, sales and customer service.

Since discovering the piano at age 3, Kelly’s whole life has been devoted to music. Kelly turned her passion into her life’s work, receiving a degree in music theory and composition. Since 1992, she has shared her love of music with many students as a guitar and voice teacher. With an expert ear, she also services and tunes pianos. As part of her most recent music endeavor, you can find her apprenticing as a band instrument repair technician at Lafayette Music.

With over 51 years of experience, Max Theriot has repaired it all. He worked as an apprentice for 4 years, and also attended an intensive training course with Cliff Ferree of Ferree's Tools. Max has trained a handful of technicians himself, and is experienced in everything from ornamental brass restoration to rebuilds and complete refinishing of all types of wind instruments. He has been a part of the Lafayette Music team for over 30 years.

Raymond Goodrich’s passion for music and life was evident from the moment you meet him. Born in New Iberia, Raymond was exposed early to the joys of music as a young band student. Raymond was with Lafayette Music Company since 1965, working his way up to the top and eventually purchasing the business with his wife, Karen, in 1977. Raymond immersed himself in everything he did, which is evident by the long list of community organizations he was involved with through the years. He served as President of Pinhook Rotary Club, President of Holy Cross Catholic Church Pastoral Council, Boy Scout Troop Committee Chairman, Assistant Boy Scout Troop Leader, Chairman of the Better Business Bureau of Acadiana, member of the Greater Lafayette Chamber of Commerce, long time member of the National Association of Music Merchants and a long time member of the Knights of Columbus, where he served as the Faithful Navigator of the 4th Degree Knights, just to name a few. Raymond also made it a priority to support and foster music education at every level. In addition to his vast involvement at the University of Louisiana at Lafayette as past Chairman of the Dean’s Advisory Council of the College of Arts and Architecture and former executive board member of the Alumni Association of the College of General Studies, Raymond created various endowed scholarships to fund music education for deserving music students.

Raymond's service to the community and professional work was always done with a smile and a generous heart, but his happiness and zeal for life always came from the music. Yes, the music! Playing lead trumpet in numerous bands through the years, Raymond's real passion was live performance. His performance resume' was lengthy. His longest tenure was with Bobby & the Rockers and most recently he played with Gene's Boogie & Brass Band.

Jamie Cappel was with Lafayette Music Company since 1981, and was the Sales Manager. With a Bachelor of Art Degree in both Music Education and Political Science from USL, Jamie went on to earn his Masters of Music in Music Education. While in college, Jamie was Drum Major for the Pride of Acadiana Marching Band, from 1972 to 1977. 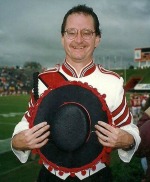 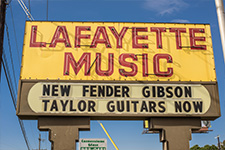